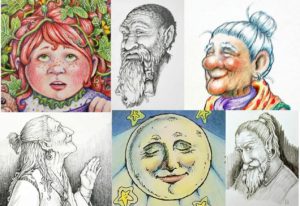 One of the coolest toys I ever had as a child was Silly Putty. Seriously, I thought of it as magic! If you pressed it into the image of one of your favorite Sunday newspaper comic characters you could see that image in the putty’s surface when you peeled it up. Then you could stretch that image and change the faces in hilarious ways. For a kid with creative tenancies that was amazing! But capturing and changing cartoon characters that were already silly or exaggerated wasn’t what captivated me the most. For some reason, making impressions from newspaper photos of real people was much more fun! When I used those I felt like I created those new funny, distorted faces myself.
I’ve always thought that Silly Putty was one of the many things that gave me an interest in drawing my own characters. It allowed me to pay attention to what faces and people looked like realistically and then gave me a way to change them. It is the same with drawing your own characters. Knowing what goes into realistic, basic facial construction will take you a very long way in making up your own characters. You don’t need to be able to create realistic masterpieces; you just need to understand the basics. Much like that Silly Putty, once you have that “regular” face down you can change, stretch, and add whatever your creative side decides with a lot more certainty. The rest is just play and practice.